Share All sharing options for: Help save the Oakland Golden Grizzlies, pt 1 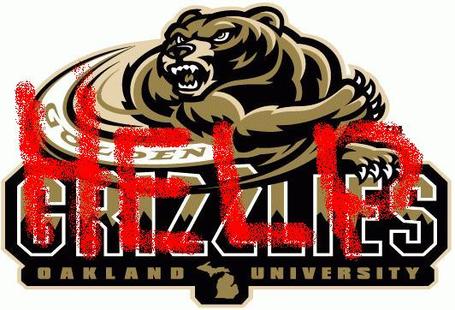 When we began furiously previewing anything and everything that involved collegiate basketball, I made what I thought to be a fairly heady but far-fetched decision: that the Oakland Golden Grizzlies would be your 2010 bracket-buster and advance to the Sweet 16.

Here's why: it's a team that returns four starters including Jonathan Jones, the team's leader and program's most decorated player of all time. Last season, they were Summit League runners-up (see: Woodside, Ben) without senior forward Derick Nelson, who is talented enough to receive all-conference honors this season, despite missing all but 17 minutes of last year's campaign due to injury. Furthermore, their non-conference schedule features games against Wisconsin, Michigan State, Kansas, Syracuse. Ample opportunities to secure a statement win, or at least some respect.

I also just wanted some attention and something to hang my hat on in March if a level of success, unforeseen by the general media, were to materialize.

But after a 4-4 start, low-lighted by a 30 point drubbing at the hands of the aforementioned Jayhawks, followed by a 31 point loss to the Memphis Tigers, the Golden Grizzlies need our help. Their best win is against UCA (Central Arkansas), and I only say that because at first glance you could be fooled into thinking they beat the UCLA Bruins.

So with that, SFBE is adopting a needy college basketball team during this holiday season.

From this point going forward, we will be offering weekly updates on the Grizz, for better or worse, and spread the gospel of head coach Greg Kampe. Maybe it will catch on, and our readership will find it in their heart to declare their support for the little guy based in Rochester, Michigan. Or maybe it won't, and this team will continue to tread water in mediocrity. We hope for the forward.

What does this team need to do in order to right the ship? Well for starters, they need to guard. The Golden Grizzlies allow 72 points a game, and not just against the nation's elite. In last night's victory over IUPUI-Fort Wayne, they gave up 76 points.

Ken Pomeroy has them rated as in the lower half of the country in both offensive and defensive efficiency, which essentially means the team doesn't do enough with their 69 possessions per 40 minutes. Dig a bit deeper and you learn that at this time, Oakland is just very average in comparison to the 346 other Division I college basketball programs.

Things need to change for the Golden Grizzlies. We are here to help right the ship.