Scenes from the Jimmy V Classic

Share All sharing options for: Scenes from the Jimmy V Classic 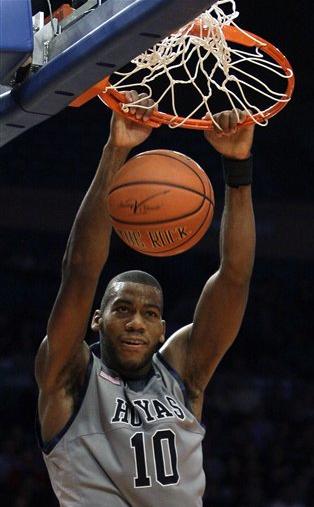 There are few things that never seem to get old or date themselves in life, one of them is Jim Valvano's memorable speech standing at the podium during the 1993 ESPYs ("I got tumors all over my body, I am worried about some guy in the back going '30 seconds right now?")

In the 15th installment of the Jimmy V Classic, we were introduced to a depleted Pitt team, an overrated Butler team, an underrated Georgetown team, and a young Hoosier bunch who may have earned Tom Crean's biggest win in his in short tenure as coach.

Game one showed us that Greg Monroe is the best sophomore in the country (apologizes to Willie Warren and Ed Davis). The versatile forward (who has his critics) dropped the hammer on the Bulldogs shaky frontcourt and may have put the Horizon League favorites up against the wall and out of automatic-bid status. Hoyas win 72-65.

Admittedly, IU-Pitt looked like a snoozer, and it was. Nonethless, they might have done some light partying in Bloomington, with the nationally televised win. After the game, Christian Watford said he was ready to "put Indiana back in the spotlight." They can make even greater strides towards that goal with a win against Kentucky on Saturday.

And for Pitt, well, the Oakland Zoo may soon be getting wrestless.