Do not go into his domain

Share All sharing options for: Do not go into his domain 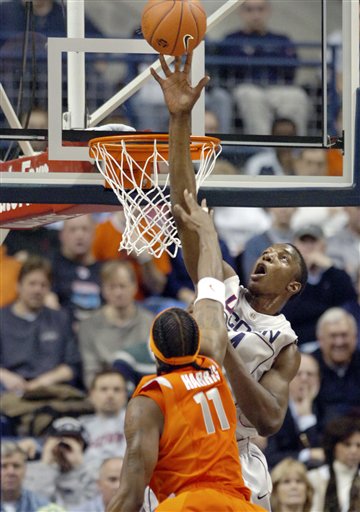 "2-3 Zone with MantaMan principles!"  It only took Bill Rafferty ten seconds to drop that hammer down on the viewers.  'Cuse got after it in the first half, forcing fourteen turnovers on a UConn team that only averages 12 an outing.  However the Orange couldn't finish, only cashing in for 7 points on those fourteen first half turnovers leaving them down three at the half.

Story of the game was the twelve foot wall in front of the Syracuse hoop.  Hasheem Thabeet did the "Get that ish out of here!" - seven times over.  Over a one minute span the Huskies reeled off eight unanswered and closed the book on the Orange.  MIke Anthony of the Hartford Courant confirms that the muscle and defense of the Huskies was the deciding factor in the 63-49 victory.  Syracuse summarized their offensive production on their last possession, when Arinze Onuaku bricked a wide open dunk, exit stage left.