Share All sharing options for: UNC clowns with Cameron Indoor 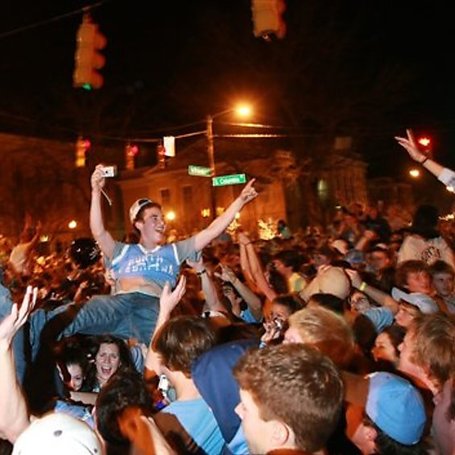 (Photo/JASON ARTHURS /The News and OIbserver)

Reincarnations of Wojo, Dunleavy and Duhon in the form of Paulus, Scheyer and Henderson seemed present during Duke's first half sniper shooting performance of 62%.  However a peeved group of Hansbrough and crew came out in the second half with a tsunami-like effect to take care of the Dookies down the stretch.  Hansbrough owes Ty Lawson a bit of gratitude for his 21 second half points, as Hansbrough was able to check off another career milestone by making it 4 for 4 in Cameron Indoor.

In a sprint to 100, the Heels closed out the last 10 meters like Usain Bolt, to pull away 101-87.  All five of the Heels starters went for double figs, shooting 55% from the floor.  Sammy Batten of The Fayetteville Observer reminds us that all the smack talk in the world doesn't matter until that final buzzer sounds, just ask Ty Lawson.  Dickie V's crowd glide wasn't enough momentum to push his beloved Dukies to a W.

It is a known fact that Duke has no inside presence and one bad match up in March might result in a third straight early exit from the dance.