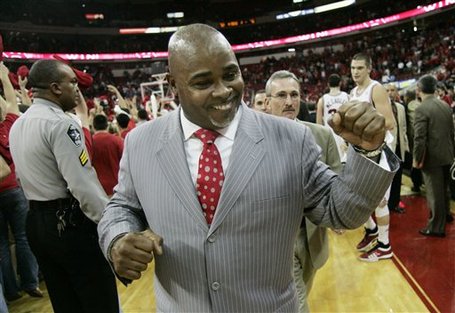 What's up with these two ex-Skip Prosser teams?  Last night both the Musketeers and Demon Deacons lost on the road, showing game slippage as they couldn't match the intensity from rawkus crowds.

What a difference a year makes for Dayton, says Tom Archdeacon of the Dayton Daily News as the Flyers avenge a 26 point loss from last season on their own court, mopping the floor this year with the Musketeers now deflated egos.

Many may not understand, or even care, about the animosity between the two A-10 schools, but the close proximity has led to some serious "I hate you or "you smell like dog poo" banter.  I laugh, as a Xavier alum, because Dayton actually does smell and have been lapped by the Musketeers as a program.  Something they can't concede.  But a minor whif of success for those kids up I-75, as all of a sudden it's them who sit atop the Atlantic 10.  Xavier is now coping with the idea of nothing higher than a five seed come tourney time, with consecutive losses for the second time this season.

In ACC country, Wake Forest just might be scared to travel as they've lost three in a row away from Winston Salem.  NC State nearly blew a double digit lead, but survive using some unorthodox defensive schemes, says the Charlotte Observer's AJ Carr, to limit Wake Forest's looks at the basket.  They win 82-78.  Jeff Teague and James Johnson were the only WF players to register double digits in scoring, and the Wolfpack's Brandon Costner led all with 23.  The tipping point came at the foul line -- as NC State gets 23 free ones compared to nine by Dino Gaudio's club.

The loss now means a log jam in the conference standings, as seven teams have between 3 - 5 losses, which makes for a very interesting race to the conference tourney.