Share All sharing options for: Near death, Irish Revived 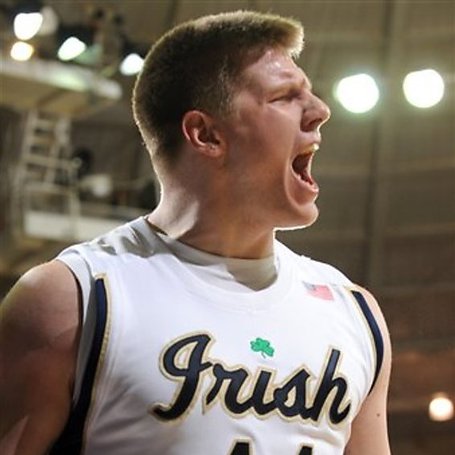 Barney Rubble is fired up!

The Notre Dame Fightin' Irish basketball team has been in dire need for some of that good ol' "luck of the Irish" lately.  The Irish came into the season a top 10 team, climbing as high as #7 in the rankings.  For more than a month the Irish have looked like the drunken, passed out Irishman at the end of Corby's Bar, losing a staggering seven straight.  The Louisville Cardinals has been the exact opposite, hanging 10 W's in their last 11 outings.  On Thursday night Digger Phelps traveled to his old coaching digs in South Bend to bring the Irish a stomach pump and that much needed luck, in order to pull off a reviving 90-57 thumping of the #7 Louisville Cardinals.

The 33 point massacre of Rick Pitino's Cards was the largest Big East Conference victory ever.  Notre Dame jumped out to an early 17-4 lead in the first 9 minutes and never let it get close.  Luke Harangody rumbled his way to tallying 32 points and 17 rebounds, Kyle McAlarney added 21 and Ryan Ayers emerged to score 19.  The 'Ville shot an abysmal 23% from the hardwood in the first half, leaving them down 18.  McAlarney told Brian Hamilton of the Chicago Tribune, "To be honest, I was sick of coming in here and feeling destroyed after a loss, this feels good."

When asked if Rick Pitino would spare his team from watching the gametape, he said, "No, because they humiliated themselves they're going to watch it again."  We're glad Pitino wasn't our Tee Ball Coach.