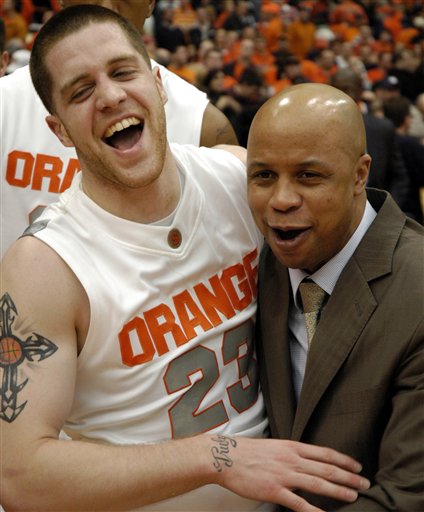 The Syracuse Orange played with the Valentines Day hearts of upstate New York early Saturday afternoon, when they almost donked off a 16 point lead with 8 minutes to go.  A missed DeJuan Summers hail mary three with zero tics left in regulation moved the game into extra time.  It was during overtime when Eric Devendorf led the Orange to victory with a pair of 3's.  The Orange were able to knock down their free throws to and move the honeymoon party to Marshall Street, with a 98-94 nail biter win.

The 'Cuse opened the second half with a 9-0 run that extended the lead to 10, eventually extending the margin to 16.  John Thompson persisted on using up all of his timeouts in order to quiet the 32,000 in the Dome and put a cease to Mr. Momentum.  Jimmy B's boys season long enigmatic internal battle at the charity stripe was not the issue today as the Orange were able to convert on 26 of their 34 attempts, led by Jonny Flynn's 15 for 16.  Flynn led the balanced attack of the 'Cuse with 25 points and a season high 13 assists, including his 1,000th point in a Syracuse uniform.

G'town might need to start looking into hotel value packages near Madison Square Garden.  Their trip up to the Garden for the Big East Tournament may be an extended stay with an invite to the NIT a.k.a. Not In Tournament.  Unless the Hoyas make Gerry McNamara run through the Big East gauntlet, they might as well apply for usher jobs at MSG.