That's the Purdue we expected to see

Share All sharing options for: That's the Purdue we expected to see 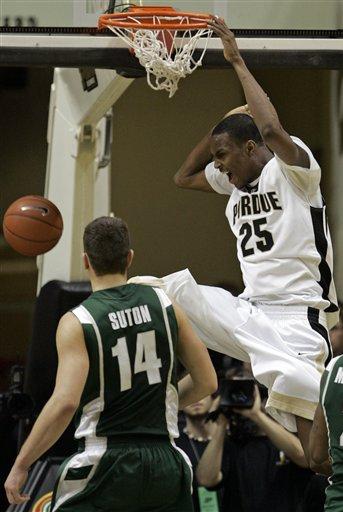 Covering our bases here...we are fully aware this blog is devoid of any mention of last night's Pitt - UCONN game, which ticked off Jim Calhoun, or even the revelation that Texas a BUBBLE TEAM! after suffering their third consecutive loss.  But we were tied up-- flying home and struggling to teach JV basketball players the basic principles of the flex offense. Forgive us please, we're only bloggers.

On to tonight's action, an empty slate of games and one groggy Dick Vitale offered up minimal entertainment.  But we finally were able to peer into the potential of the Purdue Boilermakers and their top-notch starting five.  Matt Painter's boys forced Michigan St. to shoot 32 percent from the field and forced 22 turnovers in a win that will set the stage for a delightful regular season finale on March 8th, when these two teams meet in East Lansing.

While we look forward to that, Detroit News' Eric Lacy says the Spartans shouldn't salivate over that rematch just yet, because they have plently to worry about until then. He's probably right.  Raymar Morgan returned to action after missing the last three games with a bevy of illnesses.  He logged only 14 minutes and was a non-factor.  The Spartans need him healthy, as Kalin Lucas is their only other double digit scorer.

I should probably continue on about the steady play from end to end by the Boilermakers, but I am done.  I got midly excited to do a blurb on this,  but soon realized it's nothing more than a good win for Purdue, and Robbie Hummel has terrible shot form. An important win nonetheless.