Bust on my bracket

Share All sharing options for: Bust on my bracket 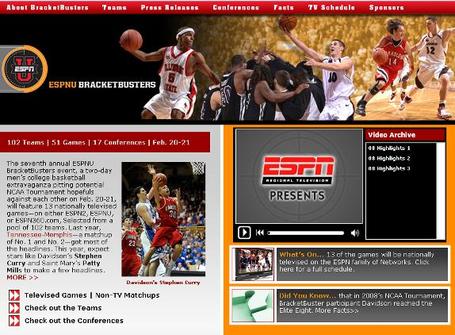 A scandalous headline indeed... Anyway, it's a BracketBuster weekend!  A growing tradition with a slate of 13 games (2 tonight, 11 tomorrow) featuring Davidson hosting Butler. Steph Curry's status remains up in the air, according to Andy Katz, and if he's unable to give it a go doesn't that pretty much defeat the purpose of placing this game at the 12 spot?

In addition to the aforementioned headliner, we also like Northeastern - Wright State, Buffalo - Vermont, and Utah State - St. Mary's despite the absence of Patty Mills.

Do I need to go into detail about these games?  Yes.

Do I want to?  No.  It's Friday. Go make impulsive decision you will regret in the morning.

Schedule below courtsey of TheBracketBusters.com, who will be live chatting all day tomorrow if you're interested.