Share All sharing options for: A chilly Curry, Davidson, fall to Butler 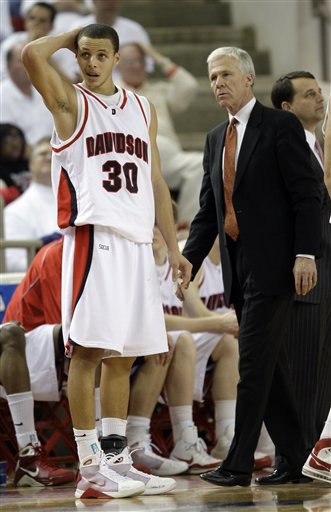 All of a sudden, Davidson might not be a tournament team. In the BracketBuster headliner, the Wildcats were downed to a well-balanced and disciplined Butler team who nicely rebounded from two consecutive Horizon League losses and dispelled any notion they were falling off the map.

Steph Curry looked healthy, but started the game 0-8 and finished with only 20 (nine below his nation leading average).

Talk coming into this game was the loser may place themselves out of contention of grabbing an at-large bid if that was the route needed to get into the big dance.  It's now a serious dilemma for Bob McKilliop's boys. Davidson has only one win against the RPI top 50 (over a Mazulla and Rouff-less West Virginia Club), and hold an RPI currently at 50, which will drop further once the numbers are crunched.

The bubble is weaker this year, according to know-it all-Doug Gottlieb and me!, but we advise this team to win their conference tournament or develop a bribery scheme aimed at CBS executives.