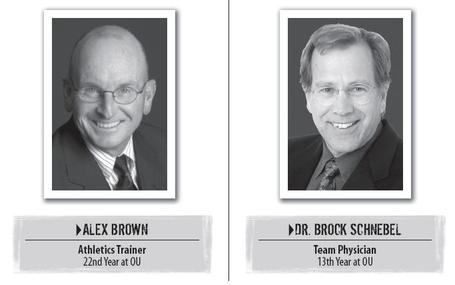 Above are Oklahoma Sooner trainers Alex Brown and Dr. Brock Schenbel.  You know them now, if you watched last night's Oklahoma - Texas game, because they spent the better part of the contest tending to Blake Griffin and preventing him from returning to action after a Dexter Pittman backhand.  Texas prevails and gets a win in a game that turned into a must win with Griffin out, says the Dallas Morning News' Chuck Carlton...ya ya whatever. Tthe real story here is Blake Griffin and the mysterious head trauma he is coping with today. An MRI today showed that Griffin doesn't have a concussion, and the revelation just makes me even more confused as to what the problem was.

Griffin seemed woozy and dazed after a back hand from the Longhorns big man. We get that, and never would do battle with Pittman.  But does it really hurt that bad? Maybe we just haven't picked enough fights with Division I basketball players to know that some of them have lead hands.

Also if Griffin has a concussion, what's he doing back out on the sidelines?  ESPN continually cut to the 2009 POY showing him doing pretty much nothing, while trainers Brown and Schenbel rubbed his back, played peek-a-boo, and looked as though they had never encountered such an injury in their 35 combined years at the school.

OU has a quick turnaround with a Big Monday game against Kansas, and Griffin's status is still TBD.  We advise Jeff Capel to address the situation, like now, and either sit his stud or just let him play if there is no concussion hurdle to pass.