Share All sharing options for: Gary Williams can still bring people together 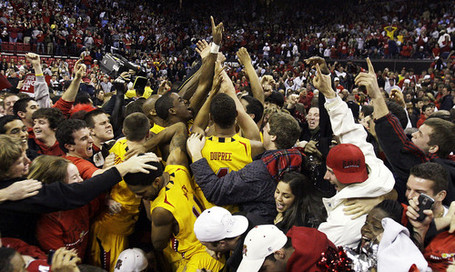 Gary Williams and his Maryland Terrapins took "Bracket Buster Saturday" as an oppurtunity to enter his squad into relevant discussions leading up to Selection Sunday.  The Terps had been on the outside of the bubble looking in, but after defeating the mighty Tar Heels on Saturday, the Terrapins are swinging at the bubble with a machete.

Willams, as you know has spent a lot of time underneath heat of the spotlight for his inability unwillingness to go out and recruit but he was able to woo 10,000 strangers into hugging each other at center court in College Park.  Greivis Vasquez looked like a damn lottery pick with his triple-double output of 35-11-10 .  We know he's not but not even Joe Smith or any other Terp has accomplished the feat in the last 22 years.

Maryland now takes a giant step to controlling their own destiny (although Nick disagrees) and should go 2-2 through the next two games.  Throw in a conference tourney win and it looks like they will get tourney inclusion.

All that said, however, we still remember the beating they took at Duke.