Louisville sticks a fork in the Georgetown Hoyas

Share All sharing options for: Louisville sticks a fork in the Georgetown Hoyas 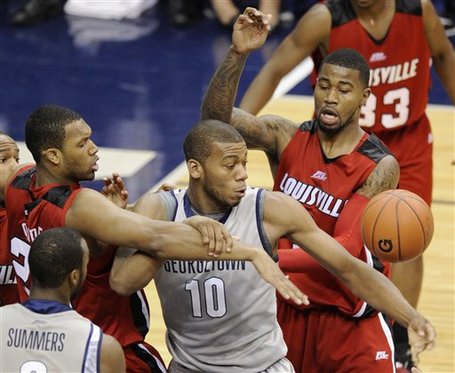 ESPN dubbed this week "Judgment Week," singling out a few schools with their backs against the wall.  One of the outcasts named was Georgetown for their game against the Louisville Cardinals in Cap City, USA.  The kids from M street have been battered and bruised in the Big East this year, including a 5 game losing streak. Basically, the tourney talk was mum among fans.  Walking into the Verizon Center the Hoyas sported a 14-11 record...5-9 in conference!!!!

HO-YA SAXA means "What Rocks?"...in Greek and Latin.  What's with the combination of languages?  We thought these kids were smart.  G'Town rocks no more, falling to Rick Pitino's Cardinals, 76-58.  Louisville looked like the big brother constantly swatting away the little bro.  Earl Clark led all Cardinals with 22 and the 'Ville didn't miss their first shot until 10 minutes into the game.  G'Town falls to double digits in the L column of the conference standings and their post season plans now hinge on DaJuan Summers , or someone with a pulse, to pull a Gerry McNamarra circa 2006.