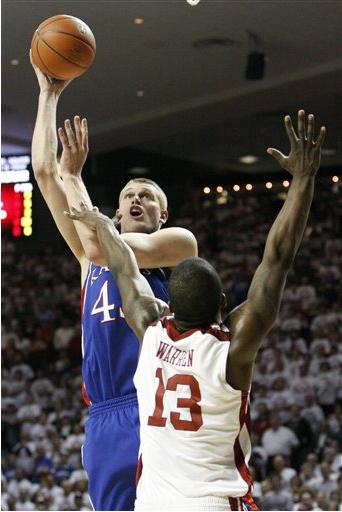 If you like defense, or took the under, your amusement at the back and forth mockery of the extended three point line was minimal.  But if you like fun things and a high-scoring contest, this was a wheelhouse game.

With Blake Griffin out with a concussion, or not, or just out because he was feeling faint, the Sooners appeared poised to prove they had the necessary depth to counter Kansas' recent gelling.  The Sooners jumped out early highlighted by a dazzling array of moves by Willie Warren, and impressive play from fill-in Juan Pattillo. They looked like they would run away and make a case they were most deserving for a number one seed.

Not so fast.  Kansas is young but deceptively experienced, as they hand the Sooners their first home loss, 87 - 78. Freshman Tyshawn Taylor finished with 26, and Cole Aldrich brought down 19 boards.  While rebounding didn't seem to be an issue initially for OU the absence of Griffin eventually mattered, in the form of seven second half offensive rebounds by the Jayhawks.

Clap it up for Bill Self & Co.  The freshman are now making that transformation to sophomore, and is a legit threat from just about anywhere on the court.  But after all this, it really ain't no thing for OU.  Like a defensive holding call, the offense got a free play.  A win and it creates a WOW factor.  A loss and you make a nice excuse and move on.  So they move on, as the first installment of the KU-OU-MU round robin concludes.