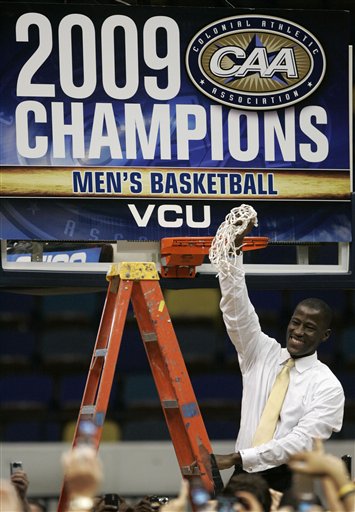 Virginia Commonwealth established themselves as a head above the rest in the CAA on Monday night, beating up on the George Mason Patriots, 71-50.  VCU ran through the CAA with a 14-4 conference record and can boast about being a legitimate tournament threat as long as Eric Maynor is the floor general for the Rams.  Maynor made sure VCU never trailed in the game as he pitched in for 25 points.

The Rams leave George Mason looking to grab an at large bid, a long shot but that is what they were working with when they ran all the way to the Final Four as America's sweetheart in 2006.  VCU has now won 3 straight conference tournaments and are only two years removed from their colossal first round victory over Duke.  VCU "put on" for their city, in their city and will now look to the leadership of Senior Eric Maynor to lead a Cinderella run.

A little more on the CAA's VCU Rams after the jump.

Projection:  VCU might be looking at one of those always dangerous 12 seeds.  With the right match up this VCU team might see some weekend action.