Share All sharing options for: Searching For: Khalid El-Amin

Considering our blog title gives a shout out to a once promising Syracuse guard gone astray, we figured it would be a good idea to keep the nostalgic juices flowing from time to time and give you that "oh wow I remember him" feeling. We will be dishing out some write-ups on former players; ranging from the All-American type who didn't have the "NBA Body," to one-hit-wonders who played their best when it mattered most...March. Feel free to pass along your favorite forgotten college basketball players, as we compile a list of prospective guys to feature. 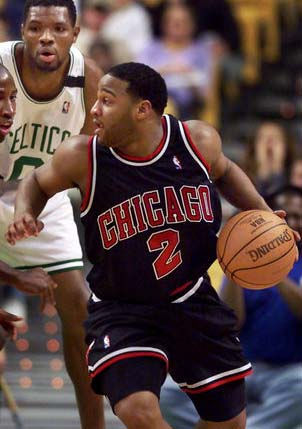 Fat, doughboy, obnoxious, pudgy, chubby, portly pig, goof.  Khalid El-Amin has heard them all.  Heck, a few times from the writers of this blog.  But El-Amin can also be called something else:  A National Champion.

The point man of UCONN's 1998-1999 team, Khalid the Kid (I can't really confirm that was a nickname, it just came to me)  was as brash and smug as there was. While many remember him simply driving and dishing to Rip Hamilton and Ricky Moore, El-Amin was actually a Naismith Award finalist in 2000.

Sadly though, the NBA wasn't too interested in his sub-six foot, plus-two-hundred pound frame.  He was a mid-second round pick by the Bulls, and eventually landed on the Heat.  His NBA career totals from 50 games: 6.3 points with 2.9 assists, 1.6 rebounds, 1.0 steals, 1.1 turnovers and 2.0 fouls in 18.6 minutes.

So Europe it was.  El-Amin began his Eurotrip in France, and also made appearances in Israel and Turkey.  Currently he's in Ukraine, where he's played for Azovmash Mariupol since 2005.  Quite a tenure given the usual bouncing around American players tend to experience across the pond.  In 2006 he won the country's Superleague title with the MVP honor to boot.

Not bad for a fat kid.