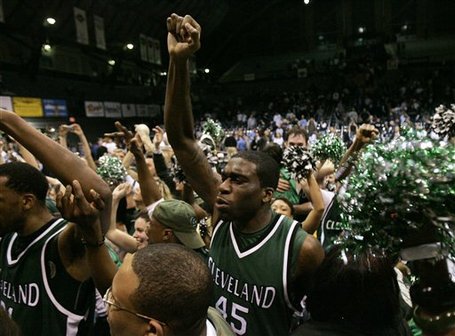 The third time is a charm for Cleveland State.  After losing their two regular season bouts with Butler, each by only two points, the Vikings were able to unite and conquer.  We're sure that Horizon league Coach of the year, Gary Waters, would trade those two regular season losses any day for the automatic bid and league champion tagline.  You can call the 57-54 victory a three point win literally and figuratively.  Cleveland State won the game from beyond the arc, knocking down a season high of 10.

Cleveland State is a resilient team that will grind it out to the end.  Just ask Syracuse, who lost at the buzzer to these Vikings.  Did coach Gray sign them up to be test subjects?

More on these Wii Fit all-stars after the jump.

Location:  Ahh, burn your bracket if you don't know this.