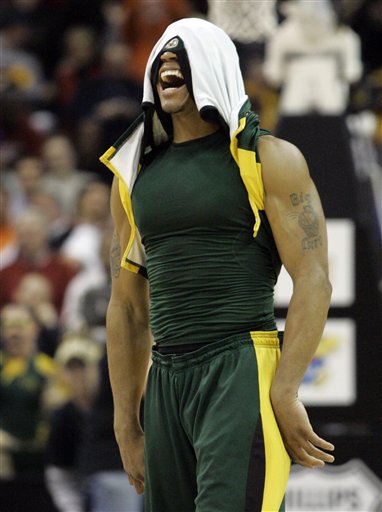 They say the NCAA tournament doesn't really get underway until top teams start dropping and people start crying-- well the same motto applies to Championship Week.  We're engaged now as Big-12 top seed Kansas fell to Baylor this afternoon, showing it can be damn difficult to beat a team three times in a season.

The Bears, a huge disappointment after an at-large bid last year, still have hopes of making consecutive trips to the dance.  Granted they blew a 17 point lead in this contest to keep it interesting, but onward they move.  As the #9 seed they'll face  Texas in the semi's, who eeked by Kansas State thanks to another double-double output from Dexatrim Pittman.