FSU takes down Lawson-less UNC, to play the Dukies

Share All sharing options for: FSU takes down Lawson-less UNC, to play the Dukies 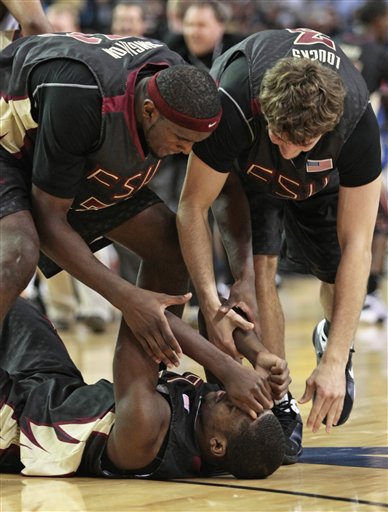 It will be their first ACC tournament final in school history, and the Seminoles are looking pretty formidable as we head into the NCAA tournament, knocking off top seed UNC today.  It's too bad I didn't wake up at a reasonable hour today, because if I did I would of taken the time to elaborate on how FSU should be the favorites in this game.  They won so I guess I can call it, although no timestamp can back me up on that claim.

Anyway, Toney Douglas put up 27 against a depleted backcourt and his boys advance.  For the Tar Heels, this might not be a bad thing.  There's often two sides to every premier team's story come March.  Wins solidify dominance, but losses allow for rest.  UNC has to stress the latter, regroup and get healthy.

In the second game, Duke positioned themselves for their eighth ACC championship in 11 seasons.  I understand why they are so hated.  This team has been catching flack as of late, including from us, but can now win this tournament and secure a #2 seed.  Both teams show under 40 percent, and split the turnover and rebounding battle, but the difference was Maryland's gross 4-15 from three point range.  The Terps will probably get a seven seed, making a squad like Memphis and Oklahoma nervous for their second round game.