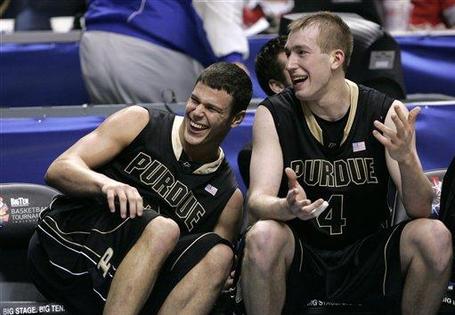 With Pitt and UCONN resting, Michigan State had an oppportuinty to seize the fourth and final top seed.  But they already beat the Buckeyes twice this season, so of course they couldn't do it again.  The Spartans continued to feed the theory that the trifecta is oh so difficult, as Evan Turner did everything for his team to give Ohio State a win.

OSU opened up a 17 point lead midway through the second half, and are gelling when it matters most.  William Buford, not BJ Mullens is the most impactful newcomer to the team.  Buford can score from anywhere on the court, and he's from TOLEDO!!! The Glass City deserves a shout out.

Purdue looks healthy and might be ready to finally live up to their preseason expectations.  They jumped out to a 20 point first half lead over Illinois, and cruised to the finish line.  Robbie Hummell showed his versitatilty and JaJaun Johnson showed he's the top frontcourt player in the Big 10, getting 19 and 20 respectivly. For the Fighting Illini, defensive specialist Chester Frazier isn't playing, and there's really no sort of timetable.  He had hand surgery, so that would suggest he's out for awhile, but nothing has been confirmed. They kind of need him if they're going to make noise in the big dance.