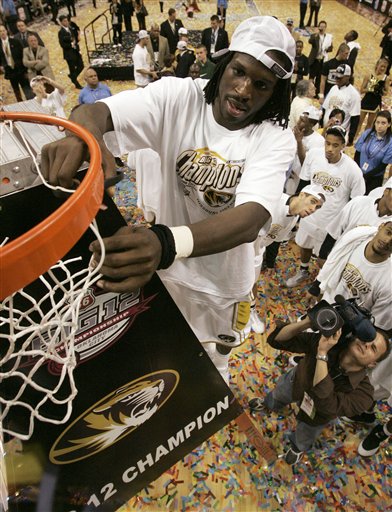 When the confetti rained down the Missouri Tigers were all smiles and hugs after holding off the upstart and surprise Baylor Bears.  The 73-60 triumph marked the Tigers first conference championship since 1993.  The self proclaimed "fastest 40 minutes of basketball" puts Mizzou into the Big Dance for the first time since 2003.

Mizzou became the class of the Big 12 behind hot shooting, knocking down 47 percent of their shots beyond the arc.  DeMarre Carroll dropped in 20 points and hauled down another 9 boards in the contest.

The loss for the Baylor Bears of course ended their Cinderella run through the Big 12 tournament.  Scott Drew's club entered the tournament with a losing record in conference but was able to reel off three straight that included wins over Kansas and Texas.  Baylor's prize for their efforts will now include an all expenses paid trip to the National Invitational Tournament...yeah, we churched it up to make it sound good for them.

More on the Mizzou's climbing status after the jump.

Projection: Mizzou could be looking at a lofty #2 seed, high enough to cruise to the Sweet 16.  Not a bad darkhorse pick for the Final Four.