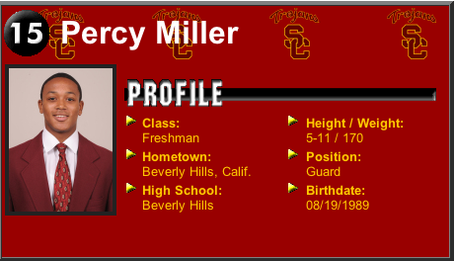 He hasn't touched the court since mop-up duty on February 4th against UCLA, but Percy Miller Jr. is still a prominent member of the USC Trojans basketball team.  I wish my father created a No Limit Record-like company so I could steal a spot on a Division I basketball team.

But as Lil Romeo is to hopeful USC walk-ons the Trojans are to the field of 65, stealing an at-large bid from a team in bubble trouble today by capturing the Pac-10 crown.  And steal did they ever.  Down 15 at halftime to Arizona State, the Trojans won the second session 42-24.

Location: The Melting Pot of America

Projected seed: 11; and they won't be intimidated.