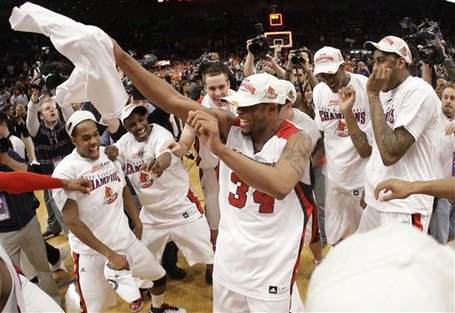 Syracuse's memorable run to get to the championship included 7 OT's in two games and proved to be the cause of their demise.  Louisville had an extra step on the 'Cuse enroute to the 76-66 capturing of the Big East title.  The Cards pounced on the weaker legs of the Orange, stealing the ball 15 times often leading to a Earl Clark throwdow.

Louisville solidifies their undeniable #1 seed and now everyone is starting to forget that 14 point spanking the Western Kentucky Hilltoppers put on them back in November, or the 33 point loss to Notre Dame, or at one point Pitino wanted Edgar Sosa on the first train out of town.

More on these Big East Champions after the jump.

Location: Home of the Kentucky Derby

Projection:  We hate to admit it but the old saying, "you can't stop them, you can only hope to contain them," fits Louisville to a T.  It will take quite an off night for these Cardinals to bow out pre-Final Four.