Share All sharing options for: Wide open spaces out West 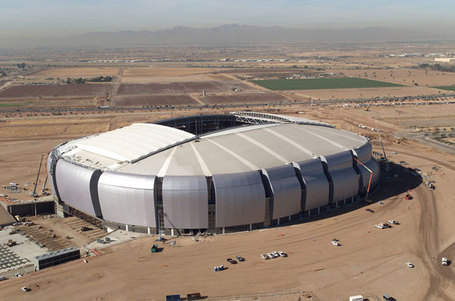 Welcome to Glendale! Home of vast desert land and a state of the art sports complex. The region itself is booming, the region in the context of this important basketball tournament is...well, a bit mediocre. You get the worst 1 seed and the best 2 seed, one who is without their second leading scorer and the other who plays in the worst good conference in America. Make any sense?

If UCONN was at full-strength they would win the West running away, much like they did in 1999 and 2004. But Jerome Dyson is sitting this out and his void is starting to become more and more glaring. Before his injury, this team had a plethora of guards; a quartet with defined roles who assumed them nicely. Now, they have a point guard who is overworked and undervalued, a back-up freshman point guard who generally makes poor decisions, and a utility guard who seems apathetic to the whole idea of competition. Suddenly, the strength of this team has shifted from the backcourt to the frontcourt, where Hasheem Thabeet is learning his craft, and Jeff Adrien is having a stellar senior season.  They have to step up and look to scare the naive and shelted Mormons at BYU -- should the Cougars advance.

When will the Huskies meet their demise? To Purdue, who, conversely, is finally healthy and getting impressive production from Robbie Hummel. Last year I saw the Boilermakers play in person, and they had "one year away" written all over them. Mid-way through the season it looked like they were still one year away, but the Big 10 tournament champs have slipped a pair of Dr. Scholl's into their kicks and are gelling hot when it matters most. Washington is supposed to be decent, but they play out West and we're card carrying members of the East Coast Bias Club, so it's easier for us to just ignore them.

To the bottom of the bracket, and for some reason we're really looking forward to the first round Cal - Maryland game. Just who are the Terrapins? Is Cal worthy of acclaim? Again...East Coast bias, we weren't following the resurgence of Mike Montgomery's career but are intrigued by the guards in this game Greivis Vazquez, love him or hate him, plays with a chip on his shoulder. Just disregard his weird acne, he's a decent player.

For Memphis, we envision them falling to Missouri in the Sweet 16. That game should go over no matter what Vegas puts down for a number.  We don't really buy into the Tigers Tyreke Evans in the tournament, nor do we buy into John Calipari's claim that Conference USA is a formidable group of teams. The (MIssouri) Tigers win.

So that sets up a surprise Elite 8, and a good one at that. Two black and gold colored teams with sights set on their respective school's first Final Four bid since the field expanded to 64 (Purdue was there in 1980). This game could go either way, but we think at this point the Boilermakers will be coupling talent with crazy momentum having just knocked off UCONN. Maybe Mr. Hummel hits an off balance three to seal the deal, adding to the deeply rooted lore of basketball in the state of Indiana. We'll say that he does, as the Boilermakers win the West.