Scottie Reynolds aka Mr. Make It Rain on 'dem foes

Share All sharing options for: Scottie Reynolds aka Mr. Make It Rain on 'dem foes 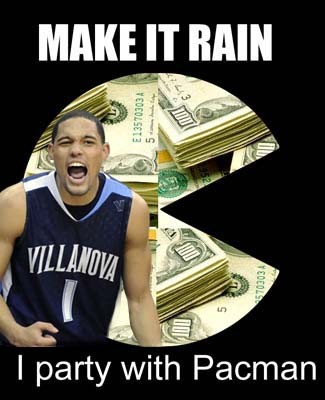 When former Notre Dame coach and current ESPN CBB Analyst Digger Phelps isn't moon lighting as the creepy old man dancing at college parties, he's offering up two cents during intermissions on Big Monday.  So when his former Irishmen were tied up with Villanova at halftime, he offered up this golden nugget: "This one is going to come down to the last two minutes."  Too bad his opinion is only worth two cents.

That tied up ball game turned into a second half landslide victory for the Wildcats, 77-60.  Midway through the second half Villanova poured it on, breaking out on a 16-1 run.  Scottie Reynolds led 'Nova with his barrage of trey's, "making it rain" on six of his seven attempts.  All the hype that surrounded the Irish at the beginning of the season has been muffled by the fact that the Joyce Center is no longer threatening and Notre Dame can't play defense, only forcing the Wildcats into five turnovers.

This Irish loss has them toeing the cliff and it punches their ticket for Day 1 of the brutal five day task to win the Big East Tournament...or at least reeling of four straight...About as impossible as Harangody being Defensive Player or the Year.  Goodluck.