Spartans sneak past the Jayhawks

Share All sharing options for: Spartans sneak past the Jayhawks 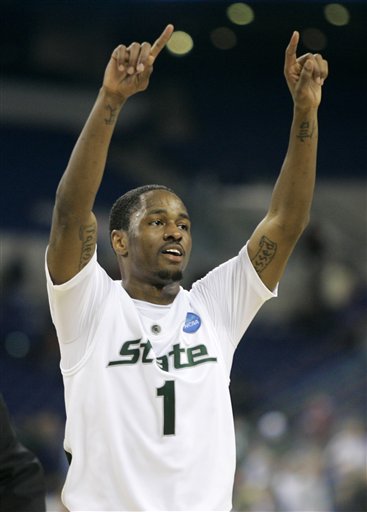 There will be a new champion this year in College Basketball!!! Eh but you already knew that.

In the only game really worth mentioning, Michigan State overcame a 13 point defect to defeat Kansas for the second time this season.  Bottom line:  Don't mess with Tom Izzo in the NCAA Tournament; he's now 23-3 as a higher seed in the Big Dance.

A two-seed, and a forgotten two-seed at that, the Spartans played with just a tad more poise and effort down the stretch, refusing to settle with jumpers and going inside. Big 10 POY Kalin Lucas took it upon himself, scoring seven points in the final 49 seconds.  The Detroit Free Press' Michael Rosenberg says that the Spartans averted disaster with some questionable calls, and let Lucas take control.  He's right about the officiating, some very fishy stuff went down late.

But does it all matter?  Louisville looked scary good against Arizona, and there may be no stopping them.  It will be a hotly contested match-up regardless-- with fans in close proximity to Indy-- so expect Lucas Oil to be rowdy.