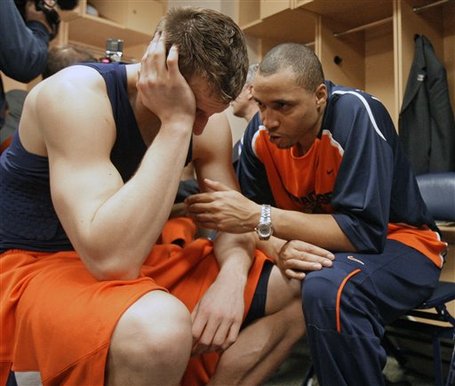 The ball was tipped and Syracuse never left the ground.  Oklahoma's Blake Griffin did however jump, early and often.  The soon to be  top pick in the 2009 NBA Draft dunked over the Orange again and again en route to a breezy 84-71 Sweet Sixteen victory.  Griffin not only took it out on Syracuse but also on the backboard, connecting forehead to backboard on one of his throwdowns.

Dunking = high field goal percentage and the Sooners did just that, shooting 54 percent from the floor.  Jeff Caple's Sooners can make it splash from long range as well (9-21 for 3).  Blake Griffin got his 30 and 14, but it was Tony Crocker's career high of 28 that was the additional Orange crusher.

Syracuse's hot wave of shooting from their JP of Grandma's Boy look-a-like, or their tatted up "Steve-O" look-a-like, came to an end Friday night (combined 5-17).  Jimmy Boeheim's crew will now be awaiting Jonny Flynn's decision to make the jump to the NBA or not.

We now await Blake Griffin embarrassing Tyler Hansbrough and everyone realizing his NBA potential is limited.