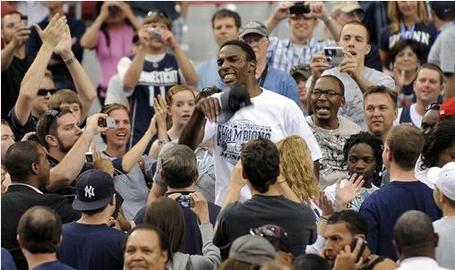 And onward they March.  The Huskies set the tone for the Big East, as the first of a probable three from the conference whose fans are making plans for a long weekend in Detroit.  Gross.

Down six at halftime it looked as though Missouri would simply fade away, satisfied with making it this deep in the tournament.  But they weren't, knotting up the score at 52 and keeping it close until the final buzzer sounded.  The Huskies asserted themselves down the stretch, as they should, winning 82-75.

The Hartford Courant's Jeff Jacobs says Walker was brilliant. In short, he certainly was.  Taking advantage of an opportunity to help match the Tigers speed, the frosh tied his career high of 23 points and offset the pressure placed on AJ Price since Jerome Dyson went down for the season.

The Tigers were able to force 17 Husky turnovers, but only got 13 points from them, and even more glaring -- only went 6-12 from the line.

So it's one team Big East team in the Final Four.  Villanova of course soon followed later in an epic game this tournament so desperately needed.  Louisville looks to make it a Three-Party later this afternoon.