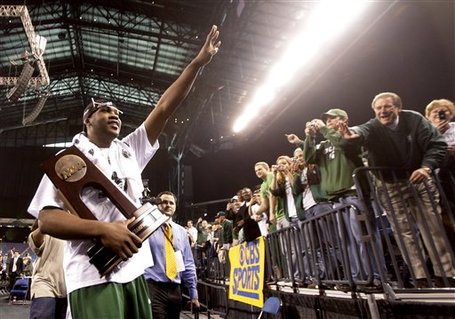 Louisville had been a victim of complacent play throughout the season, and today their apathetic approach seemed to do them in.  Tom Izzo is taking the Spartans back to the Final Four, his fifth appearance at the helm of the program, with a 64-52 victory.

Michigan St. didn't appear fazed at Louisville's press and instead imposed their will on the interior, getting second chance points and forcing turnovers when just about any Cardinal player (Earl Clark aside) dribbled into the lane.  Basically, Izzo outcoached Pitino by keeping the game slow -- Louisville only had 57 possessions, they average 69 -- and forcing Terrence Williams to just 5 points on 1-7 shooting.

It seemed like a daunting task after what the Cards did to Arizona, but after this impressive performance, victory over another Big East bully in UCONN now appears reasonable.