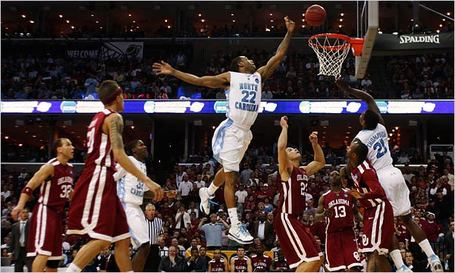 North Carolina can be described as a team whose whole is greater then the sum of their parts especially when placed on the same court as Oklahoma. The Heels used a team effort in order to counter the one headed monster that the Sooners possess.  The team effort mask Tyler Hansbrough's inefficiencies on defense end by taking on Blake Griffin with double and triple teams.

Roy Williams took his chances on the outside shooting of the Sooners, which was so successful against the Syracuse Orange, shooting 9-21 from three.  It would have been a good day for Roy at the roulette table, as his gamble paid off.  OU only locked in on two of their nineteen attempts from beyond the arc, and those two came late when the game was decided.

It's the boys in baby blue's second consecutive trip to the Final Four with the 72-60 victory in the South Regional Championship.  They never trailed and at one point carried a 21 point differential.  Hansbrough only registered eight points compared to Blake Griffin's 23 points and 16 rebounds, but it is Psycho T that gets to play another day.  That day will come on Saturday, April 4 against the Villanova Wildcats.