Share All sharing options for: Pitt over UCONN redux 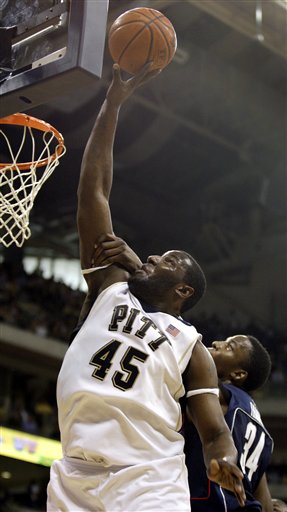 As good as the Big East is, there's only so many #1 seeds to go around --- both in the conference tourney and big dance. So while we will see both these teams playing late into the tourney Pitt is probably feeling pretty thick right now

The Zoo was rocking from the start, with the largest recorded crowd in the short history of the Peterson Center.  Pitt led for the majority of the game, and the closest UCONN got was 52-50 with just over eight to play. Panthers win, and finish the season undefeated at home.

Jim Calhoun is having visions of pudgy, can't-do-no-wrong point guards, only now he's coaching against them, as Levance Fields toyed with the Husky defenders dishing out 12 assists.

The Huskies just seemed one shooting guard short of a win (oh wait that's right, Jerome Dyson is donezo) as Pitt now temporarly roots for West Virginia.  A win by the Mountaineers tonight over The 'Ville means they capture the regular season crown.