Share All sharing options for: St. Mary's adds their star, another game 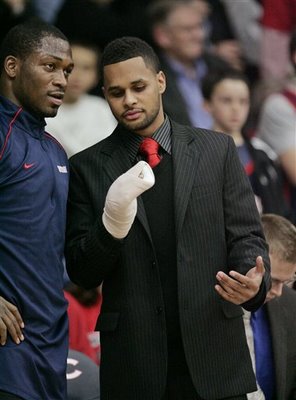 St. Mary's stud Patty Mills is expected to suit up for the Gaels WCC semifinal match-up Sunday against either Pepperdine or Portland.  Mills, you remember, was lighting up Gonzaga in January when he slipped and broke his hand.

His squad finished the regular season 6-3 without him, and remain in contention for a tournament bid.  Mills isn't expected to start, but the precense of him has got to help, and maybe he will do something crazy.

In addition to Mills return, St. Mary's, in a rare move, just scheduled their 30th regular season game (an NCAA requirement).  They will play Eastern Washington on March 13.  We've never heard of this before, but not a bad move by coach Randy Bennett.  Without the added game, his team would have to wait nearly two weeks for either their first round NCAA or NIT contest.