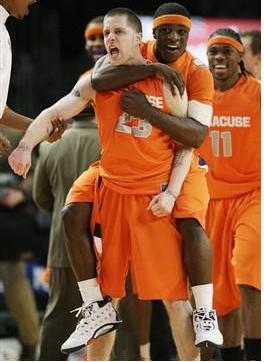 This post is a day late, but regardless, Syracuse is now probably three of its top-players short.  After the pundits began anointing them as National Championship worthy in 2010, the Orange trio of Eric Devendorf, Jonny Flynn and Paul Harris have decided to pack up their bags and start the next chapter of their lives .

We can hear Troy Nunes  whining all the way on the other side of the country.

We're pretty sure this idea was hatched by this awesome trio while participating in illicit drug use.  Surely they were talking, giggling, telling horrendous stories and ultimately deciding it would be cool to give the NBA pre-draft camps a try.

If there's any solace to take here, none of the players have reportedly hired an agent. Flynn really is the only pro in our minds, but Devo and Harris just aren't smart enough to know they don't yet belong at the next level.

I am sure I speak for all 'Cuse fans that we hope these kids come down from their high and re-consider sticking around for one final season.