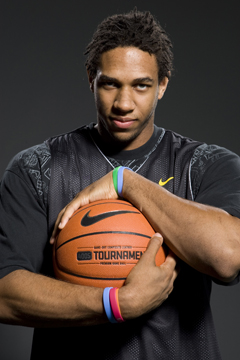 Nothing is confirmed yet, but sources who don't want to show their face are saying that it's Bill Self and Kansas, not John Calipari and Kentucky, as the choice of elite 2009 recruit Xavier Henry and his brother CJ.

The brothers have called a press conference for tomorrow morning, and KUSports.com plans to stream it live.  I would like to think that it's not just to see if their website has the bandwidth to stream live video, and instead it's because this duo will tell the world they're ready to join the already favorites to win the 2010 National Championship.

Xavier is the second ranked shooting guard in his class, according to Scout.com.  His addition (and yes you too CJ) gives the Jayhawks mind-boggling depth for next season.

Add in two more top 50 prospects in Thomas Robinson and Elijah Johnson, plus  the outside chance that Coney Island product Lance Stephenson will come to Lawrence, and you have 15 players right there that are what we call "rotation worthy."  You also have a headache thinking about how dominating this team could be next season.  Place your bets now please.