USC is also going to be really bad next season

Share All sharing options for: USC is also going to be really bad next season 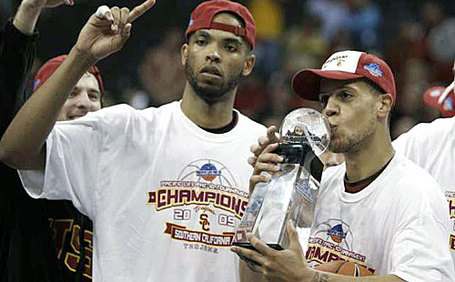 Tim Floyd is a door mat of a coach.  The "hit it and quit it" tenure as a Southern Cal basketball player has become the norm.  A week after Floyd announced his decision to remain the Head Coach of the USC Trojans rather than take the suspect Arizona Wildcats opening, three of his own minions have decided his display of loyalty was not enough to keep them in the land of palm trees and pretty girls.

One year ago, O.J Mayo rented a college dorm room while training for the NBA at USC and this year's Freshman du jour, DeMar DeRozan has done the same thing.  DeRozan has declared himself for the NBA draft but will apparently not hire an agent, creating the smallest ray of hope for Trojan faithful.  Accompanying DeRozan out the doors of the Galen Center are Taj Gibson and Daniel Hackett, both Juniors.  Hackett will hire and agent but Gibson might leave the door to return open.  If all three wait for their name to be called by David Stern then USC stands to lose sixty percent (40.5 ppg) of their scoring from 2009-2009.

Maybe Lil' Romeo will now see some court action after all.