Share All sharing options for: Tim Floyd "steps-down" at USC 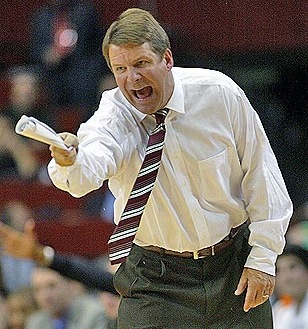 Well lookie here.  After spurning the University of Arizona and vowing that he wanted to build a tradition at USC, Tim Floyd is out in SoCal.  On the surface, it's being not-so-strategically played that Floyd is leaving on his own terms, but there's obviously some additional layers to this.

This afternoon Floyd formally announced his resignation, which could very well be translated into some language spoken by only Floyd and his closest confidants to:  "Among other things deemed punishable by the NCAA, I paid OJ Mayo to come to USC."

Here's what actually was said by the former coach...

"As of 1 p.m. today, I am resigning as head basketball coach at the University of Southern  California...Unfortunately, I no longer feel I can offer the level of enthusiasm to my duties that is deserved by the university, my coaching staff, my players, their families, and the supporters of Southern Cal. I always promised my self and my family that if I ever felt I could no longer give my full enthusiasm to a job, that I should leave it to others who could. I intend to contact my coaching staff and my players in coming days and weeks to tell them how much each of them means to me. I wish the best to USC and to my successor."

Floyd currently had three years left on his contract  and as recently as two weeks ago was seen in public with Pete Carrol meeting and greeting USC supporters.

Oh I love it when things clearly aren't as they are packaged to the general public.  Lighter fluid has now been doused on the highly flammable University of Southern California Athletic Department.