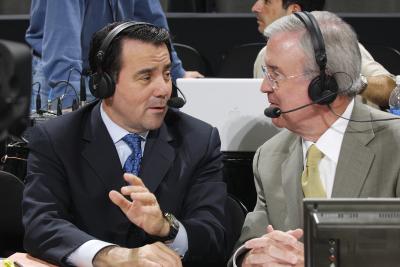 You're probably aware, but there hasn't been a college basketball game played stateside since that Hansbrough kid ran around Ford Field like he had just won a National Championship or something.  As noted in our previous post, we're in the dog days. Therefore, any sort of scheduling news thrown our way...well we just drop everything and blog about it.

First, in continuing the trend of a Big East game at 7 p.m. EST followed by a Big 12 match-up at 9 p.m. EST, Big Monday will continue to feed you a delightful dose of Ron Franklin and Fran Fraschilla coming to you live from the heartland this upcoming season.   Kansas and Texas will serve as the centerpiece, as the Jayhawks and Longhorns will be part of Big Monday all but one time during the eight week line-up, highlighted by the two throwing down in Austin on February 8.

Yes, we're salivating at the thought of Fundamentals Aldrich establishing his baby hook in the low block too.

Oh, and while it's really lost its luster due to the fact it has turned into nothing but a good old fashioned boat race since its inception, the ACC/Big10 Challenge is back!!! featuring, you guessed it, a Michigan St. - UNC rematch. This time it will be sans-Hansbrough, and likely favor Izzo's kids.  Other match-ups include Duke - Wisconsin, BC - Michigan, and Wake Forest - Purdue.

On second thought, that football conference might have a chance after 10 straight losses on aggregate.