Kevin Stallings speaks out, not on behalf of other Division I coaches

Share All sharing options for: Kevin Stallings speaks out, not on behalf of other Division I coaches 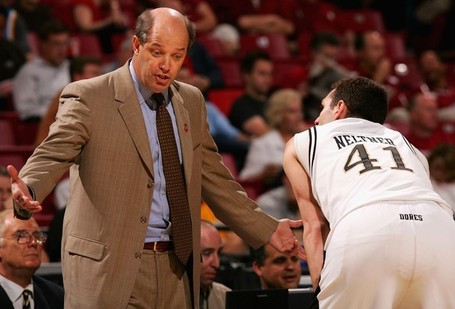 You've probably seen Pete Thamel of the New York Times' piece that brings to light the exorbitant costs Division I coaches are faced with while out on the recruiting trail.  In short, coaches are charged sometimes up to $300 just for admission. This includes a program that has names of all the camp's or tournament's participants, and clearance into a sweaty gym filled predominately with middle-aged men watching teenage boys run around trying to secure a basketball scholarship.

But all jokes aside, it actually is worth the money to many of the coaches, who piss and moan but ultimately fork over the dough because, according to Vanderbilt's Kevin Stallings, "coaches want to cover themselves."

Stallings (as I bury the lead here) continued ...

"That’s exactly what’s wrong with our business," Stallings said. "There’s a mentality where coaches want to cover themselves and not get out there and say what’s right and call out the people that are wrong.

"That’s precisely why things are the way they are. That’s why we have culture issues in our game. It’s a darn shame. The people who could have influence and do have a voice, they choose not to use it because it doesn’t help them. They don’t want anything unsettling their smooth little boat ride."

We're on board with the Commodores coach.  Maybe he was the only coach within an arms length of Thamel and was willing to give him the time of day, but we will give him the benefit of the doubt here. The problem with many of these "Showcase" events is that they're often times organized by people who are close with X, Y and Z recruit - so any bad mouthing of these events by a coach can immediately land them on the black list.

It should be noted that the NCAA is the governing body who has to approve of these events so, as Thamel writes, they are the "enabler."