Memphis hoping to lose even more for this season

Share All sharing options for: Memphis hoping to lose even more for this season 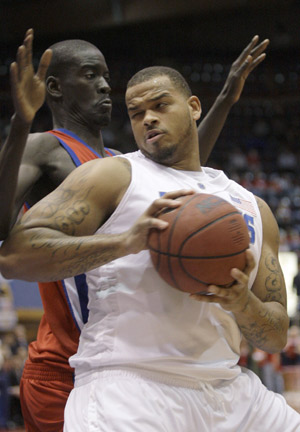 Given all the off-season hoopla that has surrounded the Memphis basketball program, it pretty much centers around the idea of "loss." Loss of a coach, loss of key recruits, and the big kick to the stomach... loss of the NCAA recognizing their 2007-2008 NCAA runner up season.

Yes on the whole the Tigers have a lost a lot of their swagger coming into this fall and probably won't inflict as much fear into their Conference USA foes as in past seasons.

But one other loss we can expect to see unveiled this season, for the better we think, is the substantial loss of weight from center Pierre Henderson-Niles. With school commencing for the fall semester, reporters are starting to get a look at players taking part in individual workouts on campus. This week the Memphis Commercial Appeal's Dan Wolken spotted a trimmed down Henderson-Niles, noting that he  "legitimately looks like a different person, and he deserves a ton of credit for what he's done in the offseason."

As of now we hear he's checking in at a robust 288 pounds. That figure still probably needs to come down, as last season Calipari almost cut the 6'8" Henderson-Niles for failing to cut the weight. Also to keep in mind...he's never really established himself on the floor (only 12 minutes per game last season). But if they say he looks like a new man, then here's to the continued slim down!

We all know the Tiger's will be a little thin on talent this season, so if Pierre can contribute then it could be an added bonus, especially down low.  Their leading returning scorer, Doneal Mack, only averaged 8.7 points per game and is a sub 40 percent shooter from the field.

Anyway, with this sort of new lease on life, let's just hope Henderson-Niles new slimmed down body doesn't set into motion a crazy set of events like The Soprano's Vito Spatafore.