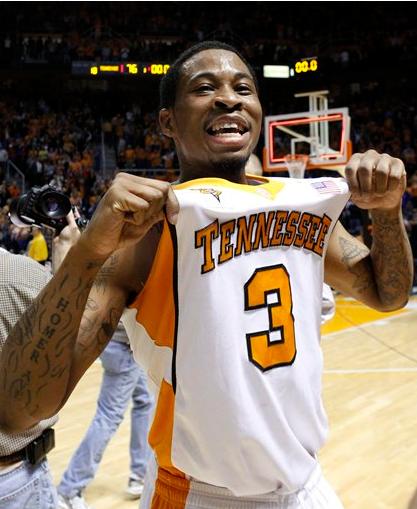 Before the January 1st gun/drug incident involving Tyler Smith and three other Volunteer players (#thuglife), Skylar McBee, Kenny Hall, Josh Bone and Steven Pearl saw a combined 35-minutes of floor-time per game. But today, while entertaining #1 Kansas in Knoxville, the four reserves ran around Pat Summitt court for a total of 68 minutes. What's more, it was McBee, a freshman walk-on, who secured victory for the shorthanded Vols over the all-world Jayhawks by nailing a three pointer with under 50 seconds to play. Despite having only six scholarship players in uniform, the other UT shocked us all winning 76-68. Suddenly there's something special brewing down in Knoxville.

Just what did Bruce Pearl tell/feed/frighten his team with that has them playing more fluid and cooperatively (33 assists in the last two games!) since moving on without 32 percent of their offense? Is it simply a case of weeding out the rift-raft? Heck, was Bruce Peal inept at determining the best rotation for his team before the aforementioned suspensions? It's a crazy question to make, but worth suggesting.

Browsing the box score, the Vols only turned the ball over seven times, nine less than what Jayhawk opponents average. And by shooting 48 percent from the floor, Tennessee flirted with breaking up Kansas' 88 (now 89) game streak of holding opponents under 50 percent. Just coming that close with a depleted roster is laudable. All this and just one UT starter, J.P. Prince, fouled out of the ball game.

So with the result unexpected, and given that it followed the first home playoff loss of Tom Brady's NFL career, does this pattern of aberrations mean that tomorrow morning the lady at Dunkin Donuts will show a high level of customer service and apply cream cheese onto my bagel?