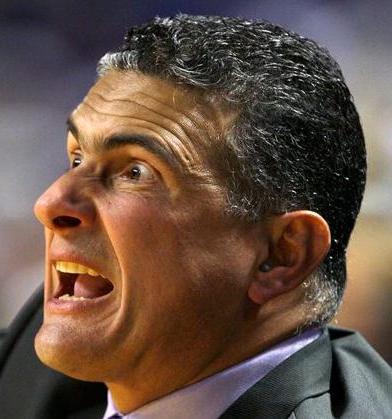 This morning, the reporter or hardcore college basketball fan is focusing on the obvious: that Kansas State downed undefeated and #1 Texas last night in fairly convincing fashion and is good enough to play in a regional final. The casual fan, just warming up to this season as football winds down, is probably having visions of Frank Martin going nutso last night and blowing off the win like it was nothing. I am paying attention to both. The win was huge, and Coach Martin is scoring high on the unintentional comedy scale.

Martin was on his game last night but his Wildcats also impressed, and it wasn't due to the pair of Jacob Pullen and Denis Clemente. Suddenly, there's a lot more to this team then their backcourt. Did you think it was possible for K-State to pull off the upset if Pullen and Clemente went combined for 17 points on 4-24 shooting? Did you think that reserve sophomore Jamar Samuels would hit an array of shots from all over the court to lead everyone with 20 points? These things happened en route to victory and, as ESPN's Andy Katz writes, the Big 12 is no longer a two-team race.

Despite a brief lead after overcoming a 14-point deficit, the Longhorns looked lost and unprepared at times last night. So much so that it seems they didn't expect that 80 (or so) percent of the 13,500+ in attendance at the Bramlage Coliseum (who didn't rush the court because they expected to win) would be boisterous and absolutely blitzed from a heavy intake of whiskey nips? Is this team soft? Rick Barnes golly-gee approach may not be suitable for this team.

So Kentucky, beat Arkansas on Saturday and that AP #1 ranking, a spot you have not held since March 18, 2003, is all yours to gloat about.