Devan Downy is our favorite player, dude is still erratic

Share All sharing options for: Devan Downy is our favorite player, dude is still erratic 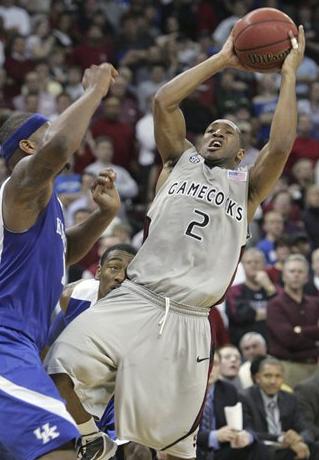 That's right; after watching 80 minutes of South Carolina basketball over roughly 72 hours, it's clear to us that Devan Downey is the most electrifying player in college basketball, and has suddenly made the Gamecocks appointment television for the rest of the season.

You could see last night's upset over Kentucky coming from a mile away. When the Wildcats defeated in-state rival Louisville earlier in the month, it seemed that this team was susceptible to losing their heads and focus if a game ever were to get nutty and erratic. That happened last night, in a hostile environment that didn't include the glowing smile of Ashley Judd. The result: the first "L" in Calipari's tenure as UK head coach. Perhaps they should have listened to President Obama, writes CBS Sports's Gary Parrish.

Downey, as you probably agree here, had just about everything to do with it. While Darrin Horn would argue he implements a game plan and believes in his offensive system, it's really just a give-it-to-Downey-let-him-figure-it-out type thing. The fifth-year senior guard is putting up 31 PPG in SEC play, and has the green light anywhere on the floor, taking and making 28 percent of his team's shots. I don't have a source to confirm it, but that's probably some sort of record. Last night he was 9-29 from the floor, actually a pretty poor shooting night and terrible for your offensive efficiency rating. But it's the way he went about those nine field goal makes that has us talking. Slicing and weaving his way through the UK defense, Downey was a man possessed, refusing to lose...or pass to his teammates. Bob Knight would go into cardiac arrest if he ever had to witness this team live.

Currently, 3-3 in the SEC, USC appears primed to play the role of lovable bubble team, which waits with bated breath on Selection Sunday to see if they can secure an 11 seed. Regardless, with no allegiance to the team, we will be sure to watch and pull for #2. You should too.  He keeps this game exciting.