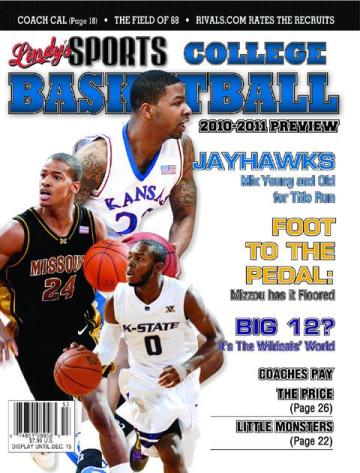 Much like when Owen Wilson exuberantly announces to buddy Vince Vaughn in Wedding Crashers that spring has sprung, we've reached that point in the year where there's real signs of life college basketball is right around the corner. It's so exciting!

The litany of ignominious grade scandals, eligibility rulings and instances of flat out lying - which have all given us pounding headaches - are slowly beginning to find resolution. Frankly, we are so over it.

Now earlier and earlier, it seems as though those attractive looking college basketball annual yearbook's are hitting newsstands, forcing fans to tack on another $7.99 to next week's grocery bill. You must have one of these, you need one of these to supplement your intake of online content, but God Almighty you shouldn't impulsively buy one of these things.

Today we take a look at Lindy's 2010-2011 College Basketball Preview, after the jump.

*Lindy’s does not list a formal pre-season all-American team, but the following players top the annual’s position rankings

The Demon Deacons lost 62 percent of their offense from last season.

Giggity. Lindy’s offers both the highest volume of and most compelling information when stacked up against Athlon and Sporting News. Somewhat astonishingly, this annual hasn’t changed it’s layout, graphics and color scheme for as long as I can remember (many of these pages look very 90s) but you need to get past that and appreciate the content provided.

It’s greatest feature is the position and unit rankings.  For the fan in need of a refresher course on who is back in school, it’s the quickest way to get back to speed on the game’s best players across the country. It also allows the reader to draw their own conclusions as to the make of of a current team's roster by assessing a squad's depth at each position. Team previews are the lengthiest, and are broken down between frontcourt and backcourt, and even the one-bid leagues are given space for their full roster, player stats and all-conference team.

Additionally, its features are actually worth reading. Often times yearbook mags get criticized for being dull, but it's hard to pass up the opportunity to read a Gregg Doyel piece on the polarizing John Calipari, and get a look at the current state of UConn basketball from Husky beat writer David Borges.

If you're not ready to throw down $22.95 for the comprehensive Blue Ribbon Yearbook, this is your next best annual.