Share All sharing options for: 25 Most Intriguing Teams for 2010-2011: #25 North Carolina State Wolfpack 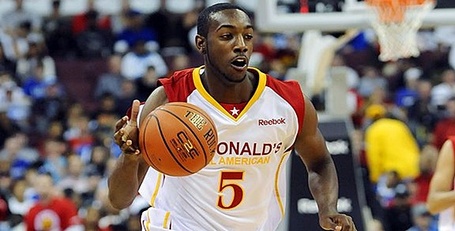 A traditional pre-season top 25? They’re fairly ubiquitous this time of year. Everyone has one, but from Duke to Missssippi Valley State and in between, there’s a lot of intriguing teams for the upcoming college basketball season.

In ascending order of of teams that pique our interest, our list consists of teams with a rare chance to make noise, have a lot to prove a lot of, quirky schedules, or are just named Kentucky.

Follow along. Story lines aren’t just for the nation’s elite.

For the first time in a long time, there’s reason to be optimistic in Raleigh. A sexy freshman class ranked fifth best in the country by Rivals.com, a senior leader who can score and rebound, and a tough non-conference schedule will do that. C.J Leslie, Ryan Harrow and Lorenzo Brown are a trio of blue chippers that could shift the current culture of mediocrity, and challenge neighboring Duke and North Carolina in the process.

Given their location, three Elite Eight appearances and one National Championship in the 1980s, and ability to attract top talent from time-to-time, expecatations have recently been unfairly set high. This year though, the positive chatter is warranted, and a return to relevance (and the field of 65) is not asking too much.

What happened this summer?

Lee Fowler stepped down as NC State’s athletic director, but will still receive $280,000 a year until 2013. He was replaced by former Maryland AD Debbie Yow, the sister of the late Kay Yow, who coached the Wolfpack women’s basketball team before dying of breast cancer in 2009. Reserves Josh Davis and Julius Mays left the team. Senior Tracy Smith, the team’s leading returning scorer, tested the NBA Draft waters but had no real intention of leaving.

C.J Leslie (6'8" forward; freshman). The Wolfpack’s nationally ranked incoming freshman class is saving marriages and making dreams come true, and it's headlined by Leslie. But what exactly are his intention here? The programs last two major recruits, Julius Hodge and J.J Hickson, both left distinctively different marks while on campus. Hodge, the wiry versatile playmaker from Harlem spent four years in Raleigh, finished third on the all-time scoring leader list, and single-handedly led the Wolfpack to the Sweet 16 his senior season. Conversely, Hickson had no desire to stick around, leaving after just one season and zero NCAA Tournament berths. Is the homegrown Leslie gunning to exceed Hodge’s college success, or test the draft waters if things get sour in a hurry?

What’s on the line?

Sidney Lowe’s job. That’s straight to the point, but there’s no denying if this season does not meet the expectations of the fans, alumni and athletic department, the class of ‘83 grad  will probably be searching for a new gig. The occasional cardinal red suit aside, Lowe’s four seasons at the helm have been a yawn. This year's team certainly possesses the personnel to earn a tournament bid. Maybe they don’t have to light the world on fire, but a dramatic improvement from last season’s (5-11) 20-16 record is a requirement.

Despite a team that's teeming with talent in comparison to the recent years, the Wolfpack's rotation is anything but settled. Had Javier Gonzalez not been such a pedestrian point guard his first three seasons, you’d be doing the "oh my god, that guy is still in college" thing. But you’re probably just now wondering who this guy is. In short, he's inefficient (a career 1.1/1 assist-to-turnover ratio) and could soon become completely insignificant If the aforementioned Harrow steps in and can prove to be a true floor leader. But Harrow is young, he's no John Wall. This spot on the floor could be the team's Achilles' heel.

Some may be expecting the Wolfpack to finish third in the ACC and reach the Sweet 16. It's probably just a tad too lofty, although they should be fun to watch.