This is Madness: Bill "Ice" Self

Share All sharing options for: This is Madness: Bill "Ice" Self 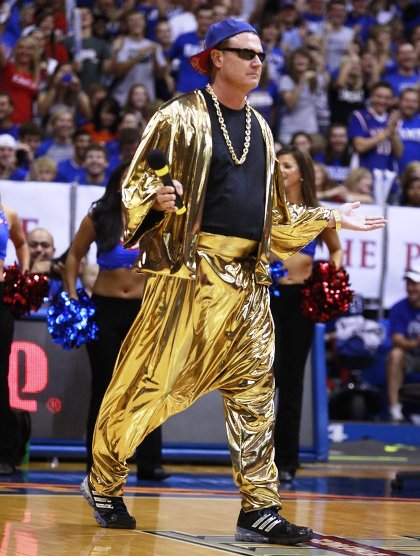 Normally, a spoof of Vanilla Ice comes off as tacky and overplayed, but we have to give some props to Kansas head coach Bill Self. For the highlight of "Late Night in the Phog," Self came out playing a rapper-type, much to the delight of a sell-out crowd at Allen Fieldhouse. Self was introduced to center court by the eccentric former Jayhawk, Scot Pollard, who served as emcee for the evening.

Video after the jump...

When the jig was up, Self came out of character and addressed the crowd:

"Tonight for 26 years in a row we've packed the fieldhouse for Late Night," Self said. "It shows why this is the best place to play and the best place to coach in America, right here. Winning a national championship changed all our lives. We need to cut down nets again in 2011."

Super frosh Josh Selby, still awaiting clearance from the NCAA, was on hand and participated in the team's scrimmage and even danced to a song by New Edition.

Meanwhile, roughly 80 miles west, the Kansas State Wildcats announced plans for a $20 million basketball training facility during their "Madness in Manhattan." Clearly, Frank Martin's club is keeping up with the Jonses.