It's about the toughtest news college basketball fans could digest this morning. Fresh off of Midnight Madness festivites across the country, the season felt underway in some regard and it was finally time to size up the competition. But today FoxSports.com's Jeff Goodman reported that Purdue stud Robbie Hummel tore the ACL in his right knee during practice this morning....yes the same right-knee ACL he tore on Februray 24th. He's on the shelf for the entire 2010-2011 season.

Since I broke into this business, I’ve always tried to remain objective. Growing up in Boston, I was never a towel-waver of any of the local teams. I’ve taken plenty of shots at my alma mater, Arizona, over the last few years.

But this one doesn’t call for objectivity.

The calls and texts came in at a furious rate following the news around noon on Saturday — from rival Big Ten coaches and other head and assistant coaches from throughout the country.

It's even difficult to Google "Robbie Hummel" right now and not feel horrible, as the Boilermaker senior was officially cleared to return to action just a week ago. Amazing how a newsfeed can turn so sour so quickly. 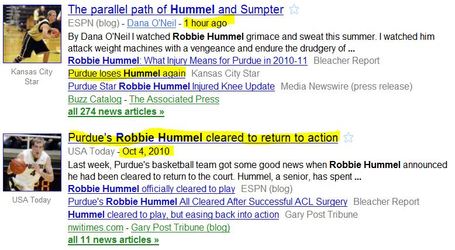 Hummel will likely be redshirted and receive a fifth year of eligibility for 2011-2012. But this was The Year  for Matt Painter's club. The trio of Hummel, JaJuan Johnson and E'Taun Moore were supposed to develop their games together and contend for a national title once they became upperclassmen. They've had two years to get it together, but both have been derailed by injuries.

Don't try and convince me the Boilermakers will be OK. Sans Hummel, they're a Sweet 16 squad at best. The whole thing is just really disappointing.