This is (not) Madness: Butler holds a real practice

Share All sharing options for: This is (not) Madness: Butler holds a real practice 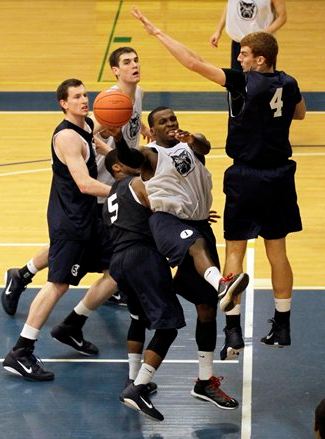 They've never done it before, so why pretend to be a program they're actually not just because everyone in the world now knows about the Butler Bulldogs?

Instead of a choreographed group dance to some overplayed 90s song, or a coach addressing a bunch of buzzed fans and students while donning an bedazzled costume, Brad Stevens and his players dipped out of Indy last night and headed 25 miles south to Division III Franklin College...to hold a serious practice.

From 6-8 p.m. last night, the Bulldogs got after it in drills - you know like defensive slides, spot shooting, and a little light scrimmaging. Even better, the team had a double session today, before returning to campus tonight. Despite losing 40 percent of their scoring and one NBA lottery pick, expectations will remain high for Butler, so there's no doubt Stevens was ready to work and begin integrating freshman Khyle Marshall and Erik Fromm into the system.

It's a stark difference than what we envision for the first day teams can practice, but when you're a mid-major who came just inches away from winning a National Championship, chances are you're not going to adopt all that cheesy stuff many of the big guys partake in.

No video after the jump here, but I guess we could give you Stevens singing "Take Me Out To The Ballgame" at Wrigley Field.