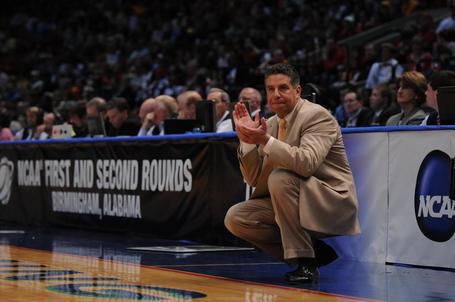 Did you catch the story from ESPN's Dana O'Neil and Pat Forde today that alleges Bruce Pearl of inviting a recruit to his daughter's graduation party while head coach at Wisconsin-Milwaukee? That's a violation of 13.05.5.3, according to Kevin Fitzgerald, the school's compliance director.

This is Pearl's second infraction to surface in as many months, meaning he could now acquire a second handful of critics thanks to some crack reporting from a pair of the Worldwide Leader's finest.

While Fitzgerald commented simply to confirm that the school "self-reported the violation on August 19, 2004," it seems like O'Neil and Forde got a lot of hang-ups and voice mail recordings over the past few days while trying to finalize this story.

Not sure what sort of follow-up to expect from this six-year old slip up from Pearl, but the NCAA is currently investigating Tennessee's football, baseball and basketball teams. So as the Vols await a notice of allegations, Bruce Pearl awaits an interesting, less lucrative, 2010-2011 season.