Assigned Reading: Play Their Hearts Out

Share All sharing options for: Assigned Reading: Play Their Hearts Out 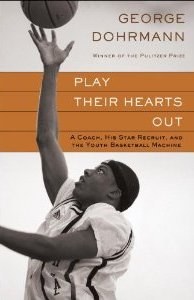 The seedy underworld of the AAU and select team circuit is certainly an intriguing sub-culture for those not privy enough to spend the summers in sweaty gyms rubbing elbows with an eclectic cast of characters. You hear stories about kids being overhyped at too young an age, exploited by dudes two, three times their age, and watching precocious kids throw on-court tantrums and let their inflated egos get the best of them.

In Play Their Hearts Out, Sports Illustrated's George Dohrmann sheds light on what is becoming a disgusting scene in interscholastic sports, providing an extrospective tale that follows the adolescent stage of a group of Southern California basketball players under the questionable guidance of AAU coach Joe Keller. Think of it as Hoop Dreams for the 21st century.

"Eight years of unfettered access," according to publisher Random House, the book focuses primarily on now New Mexico sophomore Demetrius Walker. Labeled a failure by many because he didn't meet expectations after being pegged as the best player his age before his balls even dropped, Walker is  Keller's golden goose; whose motives center around a lofty goal to serve as the guy who found and molded the next LeBron James.

The Dagger's Jeff Eisenberg posted a great Q&A with the author this afternoon, and last week's SI has an excerpt from the book, which teases the reader to head to Borders and learn about the beginning of the end for Walker following an unimpressive performance against a budding Tyreke Evans.

Because I have no interest ever spending a long-weekend at one of these invitational tournaments peppered with agent runners and scouts and assistant college coaches panting at the thought of an Applebees 2-for-$20 dinner, I am not sprinting to my local bookstore to pick up Dohrmann's book. But there's no doubt there's a lot of be learned here, so I'll be saving Play Their Hearts Out for my week-long warm weather Christmas vacation,