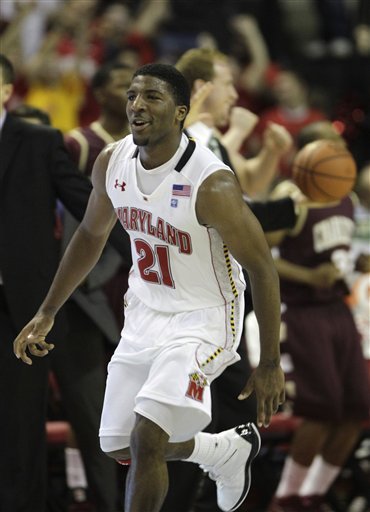 It was just over a year ago when Pe`Shon Howard announced he would wait until the spring of 2010 to announce his college decision. At the time, Gary Williams and Maryland had just received commitments from two other guards, and like any sane high school senior, Howard wanted to go somewhere he would play immediately.

After his clutch game-winning jumper last night to save the Terps from a loss to College of Charleston, it appears Howard might do more than just play. By the looks of things, he just might have won himself the starting point guard gig.

The Maryland Terrapins struggled mightily in a match-up with visiting College of Charleston, but it was Howard's spark off the bench that spared Maryland from being the embarrassing 2010 version of North Carolina. Maryland trailed by as many as nine, but stormed back, holding the Cougars without a field goal in the final eight minutes of play. Down one with nine seconds to play, Pe'Shon decided it was time to introduce himself to Terp fans who didn't attend Midnight Madness.

This Pe`Shon kid came out of nowhere it seems, but then again, name the last player Gary Williams brought to College Park with five stars next to his name in a recruiting magazine. Seriously, name him.

It's no secret that Gary Williams leaves Thad Matta, John Calipari, and Jim Calhoun to cat fight over the Sullingers, Kanters, and whomever else Jim's minions are texting. Gary is famous for chasing the unheralded high school prospects. Juan Dixon hardly got a look outside the nation's Capitol back in '99. Grevis Vasquez was ranked the 26th best shooting guard in 2006, listed behind career role players Doneal Mack, Keaton Grant, and Jerry Smith.

In the same vein Pe'Shon Howard garnered only light interest from schools around the nation, but received prime-time attention from Gary Williams and his staff beginning in his junior year at Oak Hill Academy. Interestingly, the 6'2'' 200lb guard was high on the Indiana Hoosiers' wish-list way back in 2007, but that love-fest came to an abrupt end when Kelvin Sampson ran the program into the ground. Standard Sampson.

Williams wasted little time, and began courting Howard in the fall of 2008. After two-plus years of crooning over Pe'Shon, Maryland got the player they were looking for. A strong combo guard with a solid mid-range game. But, that's not all...

Based on our extensive research, though, it's been determined that this dude can flat out drop dimes. Could he fill the vacancy left by the shimmying Grevis Vasquez? We think maybe.

As you probably recall, Dixon and Vasquez turned out alright (two of the best ACC guards in the last decade). Only time will tell what Pe'Shon's legacy will be, but tonight was a prettyy, prettyyy good start.